A few weeks ago, I was scrolling down my Time line, and saw that Punch (@iamstillpunch) had Quoted Caitlin White of BK MAG’s (@harmonicait) Review of the newly released Untitled Unmastered album/mixtape/EP? By Kendrick Lamar. 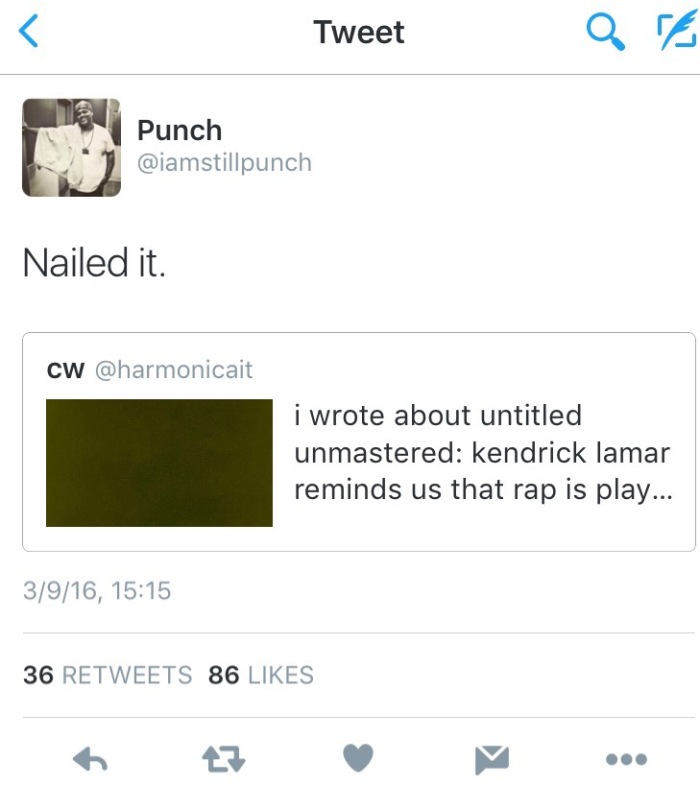 Being that Punch is the President of Top Dawg Entertainment, and his Quoted caption was “Nailed it.”, I had to find out for myself.

As I began reading Ms. White’s review, I instantly felt like my exact thoughts had been transferred to an article.

One of my favorite highlights being:

“Oh, you want me to touch you right there?/Oh, like a little lamb, play in your hair?”

“Kendrick Lamar is giggling. That’s the only way to describe the laugh he dissolves into mid-verse on the back half of “Untitled 7,” a warbled acoustic jam that devolves into what amounts to a sex joke. It follows up the song’s woozy, clacking first half, the obvious frontrunner in the recent batch of tracks he released late last Thursday night as untitled unmastered. This is my favorite part of the record, because God, does it ever feel good to hear him laughing, goofing off, straying into lewd territory not for the sake of political allegory, but just for fun. He’s playing; he’s making music with his friends and the stakes are low. It’s hard to remember the last time the stakes felt low for Kendrick Lamar.”

– Caitlyn White on her article “Kendrick Lamar Reminds Us that Rap Is Play” (Courtesy of BKMAG.COM)

Caitlin goes on to elaborate on Kendrick’s fun side, how he’s been put into a box as a “conscious rapper”, and how “Untitled Unamstered” felt like a ‘Side B’ to To Pimp A Butterfly.

Kendrick Lamar Reminds Us that Rap is Play